“So let’s get this straight: the luckiest woman out of 10 experiences worse sexism than the unluckiest man out of 40.”

A Dundee University lecturer has come up with a mathematical model to explain why women in computer science bear the brunt of sexism. Senior lecturer, Dr Karen Petrie, demonstrates how being in a minority makes someone more vulnerable to sexist comments.

“This has been a particularly good way to demonstrate it, so it is mathematical and there are no feelings involved,” said Dr Petrie.  The school of computing academic said her research on sexism in tech jobs was not an attack on men, as it assumed men and women were equally sexist.

“This isn’t anti-men. Even if men and women are making the same level of sexist comments, if women are in the minority they bear the brunt of it.”

Her findings impressed Professor Ian Gent from the school…

Why Evolution Is True

My Modern Met, an art site that doesn’t seem to be connected with New York’s Metropolitan Museum of Art, has just published the results of its Wildlife Photographer of the Year 2013 contest. And the prizewinners are great—even better than National Geographic’s annual winners.

I’m putting up seven out of 18 photographs, and it was a hard choice. I’ve also copied the captions so you can see how they were made.

Perhaps some of you will cry “Photoshop,” and perhaps the exposure or saturation were changed on a computer, or the photos were cropped, but I highly doubt that any of these are pure put-up jobs.

Go over to the site and see the rest.

This first one is the Grand Title Winner: Mother’s Little Headful
One night, Udayan camped near a nesting colony of gharials on the banks of the Chambal River – two groups of them, each…

It’s here at last! After numerous delays, the 20/20 story looking at the manosphere — and the part it plays in the online harassment of women — will be running on ABC this Friday, October 18, at 10 PM EST. Among the featured participants: the always charming Paul Elam of A Voice for Men; Anita Sarkeesian, the much-harassed feminist video game critic; and Jaclyn Friedman, the ass-kicking founder of Women, Action & the Media.

Here’s a teaser story on the ABC website which suggests that the 20/20 piece isn’t exactly going to be a triumphant moment in the history of the Men’s Rights Movement.

Naturally, the comments section over there is already filled with A Voice for Menners crying foul and spouting nonsense.

EDIT: And stop by here Friday to live chat during the show! (Well, live comment, anyway.) 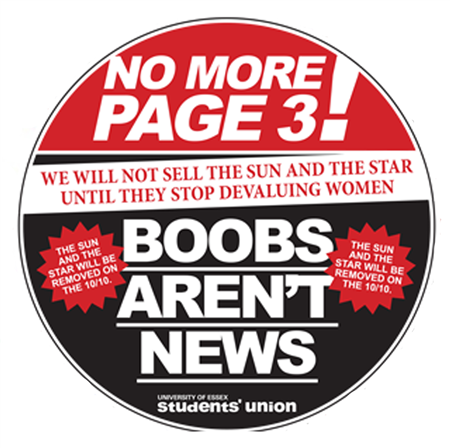 No more Page 3 thanks to University of Essex student union Essex Enquirer Students at the University of Essex are no longer be able to buy a copy of The Sun or The Star following a decision made by the Union Council after students said they felt uncomfortable with the representation of women in the papers.

Chantel Le Carpentier Vice President for Welfare and Community at the Students’ Union said: “The images of women published in these newspapers not only encourage readers to judge women on their bodies and appearance, but also misrepresent the role of women in society as just objects for men to look at…”