He had this look in his eye.
He knew the answer.
He was certain.

He drew up, paused, and slowly readied himself for the assault — chalk in hand, poised to hit the board.

He glared at the audience and said: “Bayes”

He had just demolished in his own mind, the enemy.

That hack of a job, not theoretically grounded — that gibberish of ad-hoc computation used by MYCIN and PROSPECTOR. Crazy! Silly!Why did they use such sloppy kludges! He had the better solution. “Bayes” — Bayesian theory could answer it all.

Bayesian this, Bayesian that, he rammed his argument into his audience, flittering for one mathematical equation to another — from one argument to another, with a real vehemence. He prowled back and forth, for the entire talk. Bayes formula. Bayesian. Vanquishing all opponents, real or imagined, once and for all. In the…

A young non-Irish woman with limited English and precarious residency status, discovered she was eight weeks pregnant as a result of what the Sunday Times have reported as a “traumatic rape.” Due to her legal status in Ireland she could not freely travel abroad in order to access an abortion so immediately applied to have a termination in Ireland under the new legislation, stating that she was suicidal at the prospect of carrying the foetus to term. Like Savita Halappanavar and Bimbo Onanuga, she is another woman from outside of Ireland who has been completely failed by the Irish medical system.

Three doctors declared that the woman was suicidal under the panel formed under the Protection of Life During Pregnancy Act in January. The legislation states that medical practitioners may authorise an abortion where “there is a real and substantial risk of loss of the pregnant woman’s life from…

Savita Halappanavar died on this day 4 years ago in Galway University Hospital. She died in suffering and in pain, because she was pregnant, having been denied basic medical care she and her husband Praveen repeatedly requested.

She died because abortion is illegal in nearly all circumstances in Ireland and even now remains so; but she also died because she was a pregnant migrant woman and a woman of colour in Ireland. Migrant women are twice as likely to die in pregnancy in Ireland as women born in Ireland and the UK. Nora Hyland, Bimbo Onanuga, and Dhara Kivlehan are all names of migrant women who’ve died in or after pregnancy in recent years in Irish maternity hospitals who should be alive now with their children. Only a few months ago Malak Thawley died in an operating theatre of the NMH after basic surgical equipment “could not be found” to…

They crossed their boundaries. They got out of their binds, and eventually saw the hidden bonds that were broken and not broken.  They understood.

Latinintro – vert: to turn within

“My daughter is not an introvert,
— she’s pretty”

One Babe had a problem.  She was an introvert – she was what they call shy — but she wanted to be an actress.

This Babe was lucky. At 17, she encountered “the most unforgettable character I’ve ever met.” The rest is history: for he, Salvatore, her unforgettable character, was not “intro-verted” — in fact he was far more gregarious than shy, or, in Latinized German jargon, he was “extro-verted.”  He had wiggled himself into the Los Angeles music scene; he had paid his dues as a gofer and backup singer for Phil Spector’s record company.

She had said: “For better or worse, I never plan my life. I focus on today. I love spontaneity. That is what has put me in some strange and wonderful places in my… 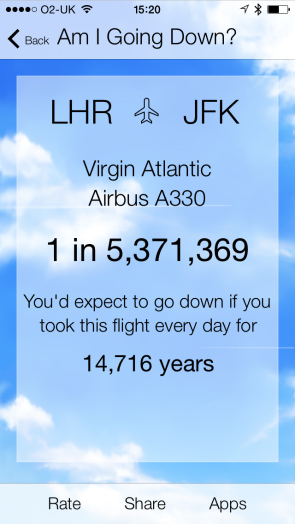 Is my flight going down?

The Economist has a story about an iOS app called “Am I Going Down?” that estimates the odds of your flight going down based on the departure and arrival airports, the airline, and the type of plane used [Link]. The methodology isn’t available, but presumably it’s based on past performance (# crashes / # of flights)

People are really bad at assessing risk. There is a huge risk analysis literature on how we tend to overestimate rare events, and this overestimation drives policy decisions. I like two papers by Chauncey Starr and Chris Whipple about how we perceive risk and what we do…

To celebrate this classic free-wheelin example of a Different Drummer, I copied his Keirsey Temperament Portrait from Keirsey.com

Watch and Observe a Composer in Action

I’ve been putting off writing this post because I wanted to do more justice both to the history of the Black-men-raping-White-women charge and the survey methods questions. Instead I’m just going to lay this here and hope it helps someone who is more engaged than I am at the moment. I’m sorry this post isn’t higher quality.

Obviously, this post includes extremely racist and misogynist content, which I am showing you to explain why it’s bad.

This is about this very racist meme, which is extremely popular among extreme racists.

The modern racist uses statistics, data, and even math. They use citations. And I think it takes actually engaging with this stuff to stop it (this is untested, though, as I have no real evidence that facts help). That means anti-racists need to learn some demography and survey methods, and practice them in public. I was prompted to finally write…

Dear Mr. Trump… can I call you Mr. Trump? Is that ok? I want you to be happy, that’s very important to me.

Before I get started, let me say this letter isn’t from all women. The Trumpettes surely won’t approve of this message. But this is from most women.

We see right through you. We have all known you at some point. Your ways are not unfamiliar to us. We see through you because we’ve been dealing with you our whole lives.

We heard you call women pigs. And disgusting. And stupid. And bimbos.

We watched as you called a former Ms. Universe “Ms. Piggy” and then spent four days continuing to insult her.

We see your weakness. Your lust for attention at any cost, your need to denigrate women. We see all of it. And we’re mad.

Yes. We’re mad. And fired up. And here’s the thing about us……

As a feminist activist who has worked on systemic violence on Indian women for over fifteen years, I have long waited for India to produce a film like Parched.  Directed by Leena Yadav with a strong, all-female, central cast, there is a cinematic beauty and integrity to the film’s narrative that undoubtedly are among the factors that have earned it eighteen international awards and a place in the Oscar library.  But what makes this film particularly memorable, is how without cringing it makes a number of explicit and discomforting statements on how women need to deal with male violence which, even if presented within an Indian cultural context, have universal relevance.

Parched is the story of three women, Lajjo, Rani and Bijli, in an Indian village and how their friendship helps them triumph misogyny and male violence in their personal lives. Lajjo (played by Radhika Apte)…